"A gift of Gods to man" is a justifiable characterization of the modern tourist resort, Stalida. The name of that beautiful village, belonging in the municipality of Malia, comes from the ancient Greek place name, Stalis.

If one goes back to the past of that place, he finds out that the picture the visitor gets today has no relation with what it used to be once. During the first decades of the twentieth century, Stalida was used as a port of transportation.

For goods produced in the area and in Lassithi (olive-oil, wine, bananas, and horticultural goods) to Heraklion, with small sailing vessels. Until the 1980s, Stalida was nothing more than a coastal patch with a few houses, kept by the inhabitants of the village Mohos, since Stalida was considered its haven. At this period, hotels, new houses and rooms-to-let started to be constructed and tourist development first occurred in the area.

Hospitality is the main feature of the locals, who will welcome you and make you feel at home. Stalida is ideal for family holidays and is famous for its very good climatic conditions (very dry climate).

Wander along the coastal road. You will come across very modern, sophisticated restaurants, clubs, cafes with an ideal atmosphere, as well as numerous stores for your shopping. A common characteristic in all those places is friendliness, smiling people, good quality and excellent service!!

That destination will impress you by all means, since it has succeeded in combining calm and relaxation with magic nights under the moonlight by the coast, accompanied by the Cretan spirits, tsikoudia, good wine, exquisite Cretan food and traditional music. Good cheers and joy will certainly make your nights.

Your mind will always go back in that astounding corner of Crete, captive by the charms of that dreamy destination. 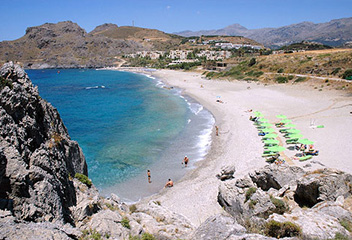 Crete is one of the most popular holiday destinations in Greece. Fifteen percent of all arrivals in Greece come through the city of Heraklion (port and airport), while charter journeys to Heraklion last year made up 20% of all charter flights in Greece.
Today, the island's tourism infrastructure caters to all tastes, including a very wide range of accommodation; the island's facilities take in large luxury hotels with their complete facilities, swimming pools, sports and recreation, smaller family-owned apartments, camping facilities and others. Visitors reach the island via two international airports in Heraklion and Chania and a smaller airport in Sitia (international charter and domestic flights starting May) or by boat to the main ports of Heraklion, Chania, Rethimno, Agios Nikolaos and Sitia.
Popular tourist attractions include the archaeological sites of the Minoan civilisation, the Venetian old city and port of Chania, the Venetian castle at Rethymno, the gorge of Samaria, the islands of Chrysi, Elafonisi, Gramvousa, and Spinalonga and the Palm Beach of Vai, which is the largest natural palm forest in Europe.

Cities
Heraklion is the largest city and capital of Crete. The principal cities are: 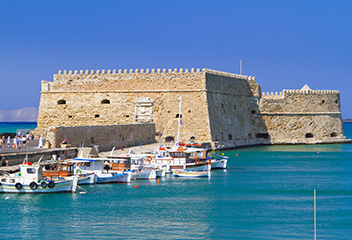 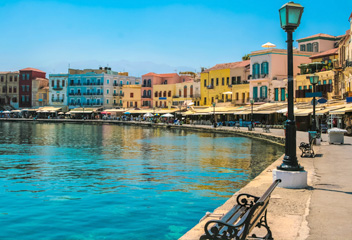 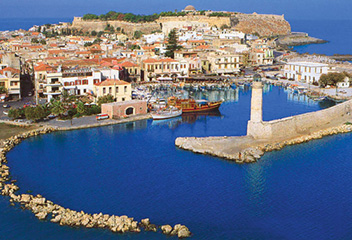 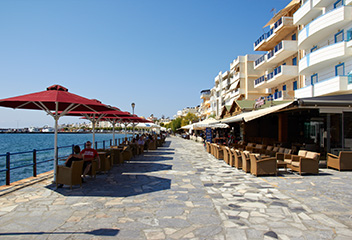 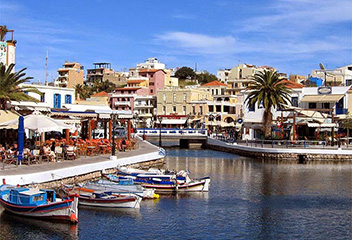 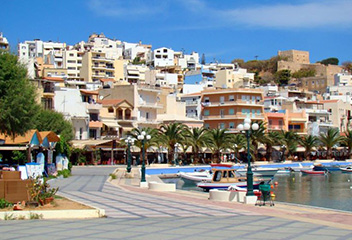 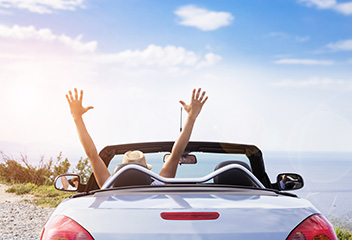 Climate
Crete straddles two climatic zones, the Mediterranean and the North African, mainly falling within the former. As such, the climate in Crete is primarily Mediterranean. The atmosphere can be quite humid, depending on the proximity to the sea, while winter is fairly mild. Snowfall is common on the mountains between November and May, but rare in the low-lying areas. While some mountain tops are snow-capped for most of the year, near the coast snow only stays on the ground for a few minutes or hours. However, a truly exceptional cold snap swept the island in February 2004, during which period the whole island was blanketed with snow. During the Cretan summer, average temperatures reach the high 20s-low 30s Celsius (mid 80s to mid 90s Fahrenheit), with maxima touching the upper 30s-mid 40s.
The south coast, including the Mesara Plain and Asterousia Mountains, falls in the North African climatic zone, and thus enjoys significantly more sunny days and high temperatures throughout the year. There, date palms bear fruit, and swallows remain year-round rather than migrate to Africa. The fertile region around Ierapetra, on the southeastern corner of the island, is renowned for its exceptional year-round agricultural production, with all kinds of summer vegetables and fruit produced in greenhouses throughout the winter.

Gorges, rivers and lakes
The island has a number of gorges, such as the Samariá Gorge, Imbros Gorge, Kourtaliotiko Gorge, Ha Gorge, Platania gorge, the Gorge of the Dead (at Kato Zakros, Sitia) and Richtis Gorge and waterfall at Exo Mouliana in Sitia.
The rivers of Crete include the Ieropotamos River, the Koiliaris, the Anapodiaris, the Almiros, the Giofyros, and Megas Potamos. There are only two freshwater lakes: Lake Kournas and Lake Agia, which are both in Chania regional unit. Lake Voulismeni at the coast, at Aghios Nikolaos, was formerly a sweetwater lake but is now connected to the sea, in Lasithi. Lakes that created by dams also exist in Crete. They are three: the lake of Aposelemis dam, the lake of Potamos dam, and the lake of Mpramiana dam. 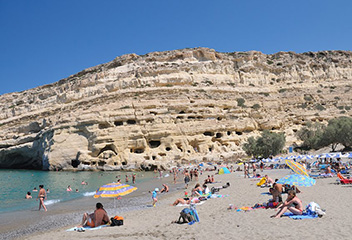 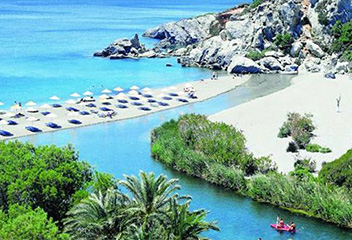 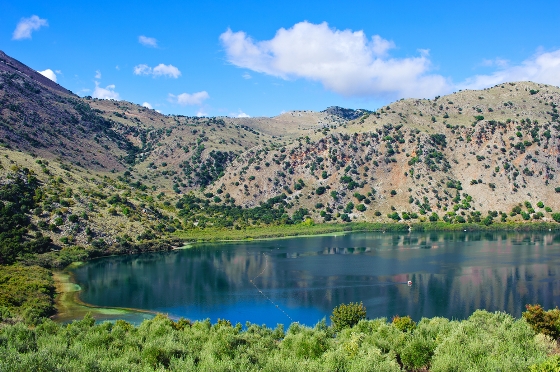